Home
Stocks
Need to Know: The Fed is ‘fighting the last battle,’ and here are the risks to its new strategy
Prev Article Next Article
This post was originally published on this site 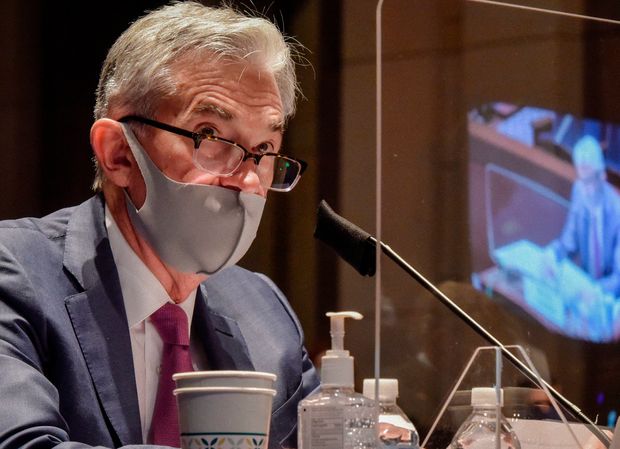 Federal Reserve Chairman Jerome Powell is reflected in the sneeze guard set up between himself and members of the House Committee as he appears before the House Financial Services Committee hearing on Capitol Hill on June 30, 2020, in Washington, D.C.

The Federal Reserve is announcing its latest interest-rate decision on Wednesday, and expectations aren’t for a big shift at this meeting. More on that later.

Still the big issue in the world of central banking is last month’s official pivot to average inflation targeting. That is, the Fed is saying inflation will be allowed to run over 2% if — as it has — price growth has been under that target for a significant period.

Now the Fed didn’t really explain how it would implement this new strategy in practice. Tim Duy, the University of Oregon professor who writes the Fed Watch blog, says the benefit of that new shift comes when the economy is running faster than expected. “It’s particularly important in the context of a recovery that appears more rapid than anticipated. Along with the more rapid recovery is a faster pace of inflation,” he says.

Already, the price level is looking to be returning to its pre-COVID trend. But the market, thanks to the Fed’s new guidance, isn’t shifting its expectations on interest rates. 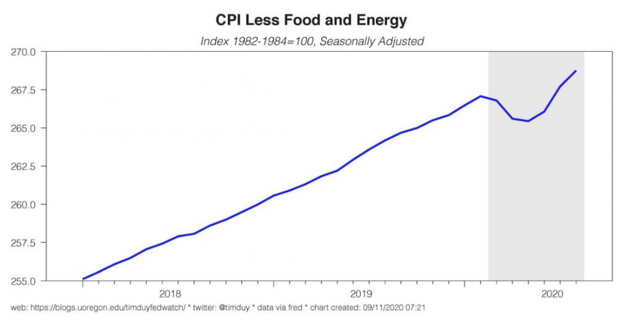 “Now we are thinking that there is nothing in the data to prompt a more hawkish reaction from the Fed,” says Duy. “The Fed is content to allow real interest rates to continue to drop and presumably content to allow them to fall even a notch further than the last cycle.”

There is a risk in this strategy. “The Fed is committed to fighting the last battle, the long, slow recovery experienced in the wake of the Great Recession [2007-09 recession]. The Fed is absolutely unprepared for any outcomes on the right-hand side of the distribution. That opens up the risk that the Fed finds itself pivoting in 12 months or sooner,” says Duy.

Another risk is the increased importance put on financial stability in the strategy change. Like the average inflation targeting, the Fed didn’t say how it would put that emphasis into practice. “You kind of have to wonder what happens if the Fed’s commitment to maintaining deeply negative interest rates keeps the heat up under risk assets as you might expect it to,” says Duy.

The Federal Reserve decision is due at 2 p.m. Eastern, followed by Chairman Jerome Powell’s press conference at 2:30 p.m. Traders will be focusing on the Fed’s new forecasts on interest rates, economic growth and unemployment, as well as Powell’s comments on the outlook, and the central bank’s Main Street lending program that so far has been barely used.

“Jerome Powell will use the press conference to reinforce the message that the Fed has no interest in raising interest rates anytime in the next couple of years, which should help to anchor the short-end of the yield curve even more sturdily,” said James Knightley, chief international economist at ING.

Ahead of that, retail sales data for August are due, a key indicator of how well the U.S. consumer has fared since the expiration of $600 a week in federal unemployment benefits. A home-building survey also is due for release.

Facebook FB, +2.35%, the social media giant, may see pressure after The Wall Street Journal reported the Federal Trade Commission is planning a lawsuit against it by the end of the year.

Snowflake SNOW, -0.67%, the cloud software company backed by Warren Buffett’s Berkshire Hathaway BRK.B, -0.45%, goes public in a hotly demanded initial public offering. Snowflake priced its IPO at $120, after initially seeking as little as $75 per share. Also on the IPO front, Israeli software company JFrog priced its initial public offering at $44, above its $39 to $41 price range.

Read: Snowflake IPO: 5 things to know about the Berkshire-backed company as it heads for record software offering

Ray Dalio, the founder of hedge-fund giant Bridgewater Associates, told Bloomberg News the dollar’s status as a reserve currency is at risk from its spending and monetary stimulus after COVID-19.

After another strong showing for the Nasdaq Composite COMP, +1.20% on Tuesday, U.S. stock futures ES00, +0.64% were stronger ahead of the Fed meeting. 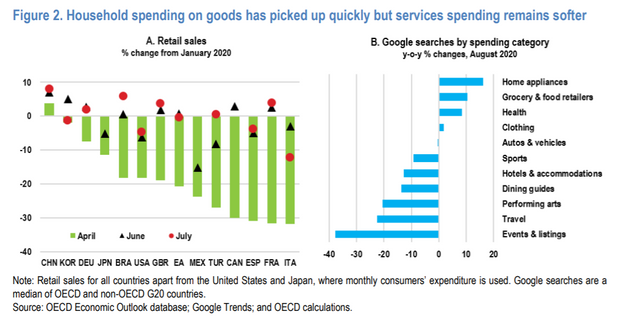 The Organization for Economic Cooperation and Development put together this nifty chart on Google searches to show what types of spending has growth during the coronavirus pandemic, versus what has fallen. As the chart shows, services spending remains restrained even though goods spending has recovered, and in some cases, improved. The OECD on Wednesday boosted its global economic outlook while warning policy makers not too tighten fiscal policy too quickly.

A bear from the Ice Age was found preserved in the Russian Arctic.

The most expensive toilet seat at auction was sold, by Rolling Stones bassist Bill Wyman.