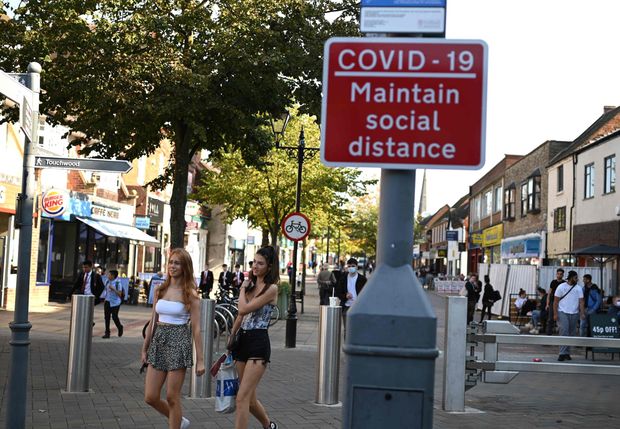 People walk past a sign encouraging social distance in a shopping street in Solihull, central England, on September 14, 2020.

European stocks rose on Monday, as foreign investors went shopping for bargains in a flurry of activity.

Futures on the Dow Jones Industrial Average YM00, +0.96% rose 222 points. Politics were in the limelight after a report Donald Trump paid $750 in federal income taxes in each of his first two years as president, a day after he nominated Amy Coney Barrett to the U.S. Supreme Court. Amid the presidential focus, U.S. lawmakers are still weighing a second stimulus package.

In Europe, the ninth round of talks between the U.K. and the European Union are due to kick off Tuesday.

The Global Times last week said HSBC could be added to China’s “unreliable entities” list, so the Ping An move helped to counter those concerns.

Steel-and-mining company ArcelorMittal MT, +9.62% rose 10% after reaching a deal to sell its U.S. arm to mining company Cleveland-Cliffs CLF, +2.97% in a deal worth $3.3 billion including assumed liabilities.

British bookie William Hill WMH, -10.85% fell 13% to 273 pence, after rocketing 43% on Friday when it disclosed Caesars Entertainment and Apollo each were talking about placing separate bids. Caesars Entertainment CZR, +7.94% on Monday said it may offer 272 pence in cash for each share, valuing the company at £2.9 billion. Caesars said the deal, if it comes off, would better serve its customers in the fast-growing U.S. sports betting and online market.

Diageo DGE, +6.62% DEO, +0.46% jumped 5% after the alcoholic beverages giant said its outlook for the fiscal year has improved, driven in large part by its U.S. business, due to “resilient” consumer demand and the spirits category continuing to gain share within the total beverage alcohol market.