Home
Stocks
TaxWatch: Can Trump write off $70K in haircuts? The IRS allows tax deductions for vasectomies, rehab, fertility treatment and more
Prev Article Next Article
This post was originally published on this site 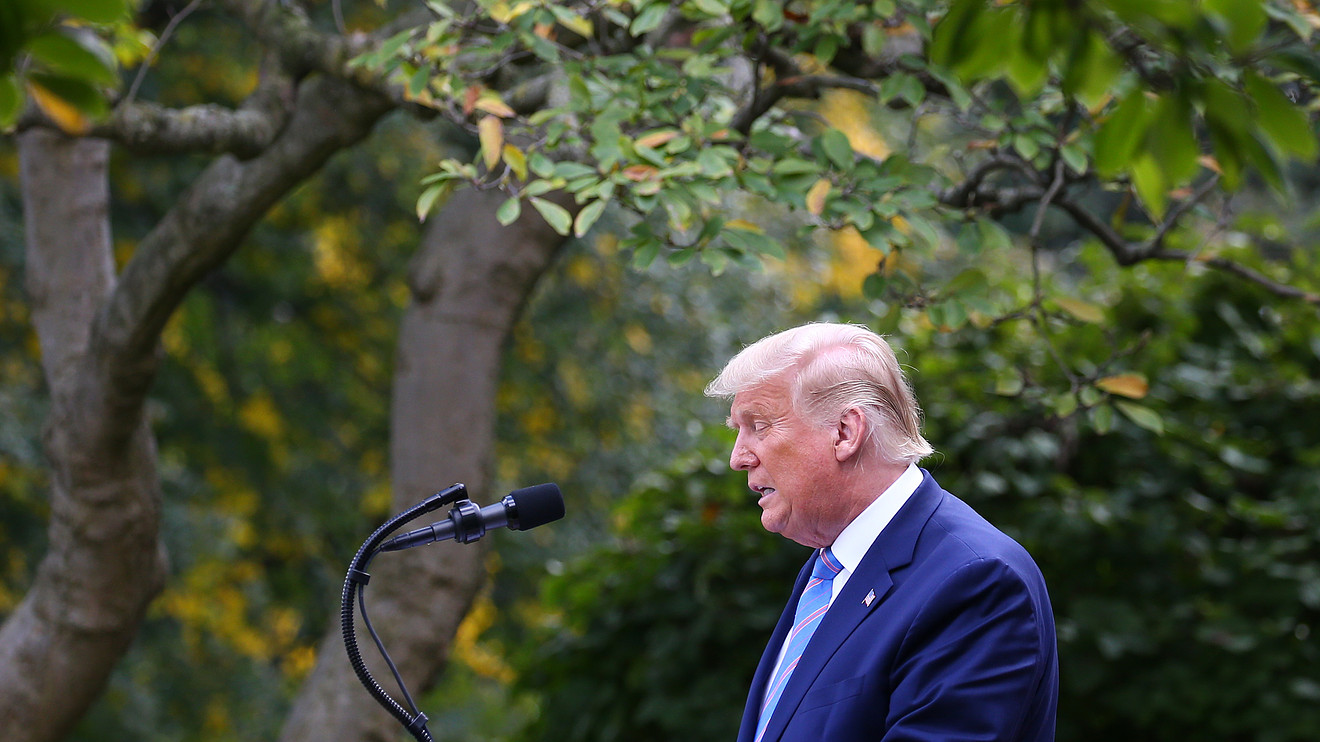 The Internal Revenue Service is not as punitive on tax write-offs as some people might think.

President Donald Trump paid just $750 in federal taxes in both 2016 and 2017, and no federal income tax in 10 of the previous 15 years due to massive business losses, the New York Times reported Sunday.

The paper said it had acquired more than two decades’ worth of tax-return data from Trump and his business organization, though it does not include his personal tax returns for 2018 and 2019. Among the investigation’s revelations: Trump took tax deductions on expenses “including residences, aircraft and $70,000 in hairstyling for television.”

“ ‘Expenses that are inherently personal are nondeductible personal expenses,’ the U.S. Tax Court ruled in a case involving a TV presenter. Such changes must be specifically required for work. ”

Haircuts are difficult to write off. “You can’t deduct expenses of radio and television appearances to increase your personal prestige or establish your professional reputation,” according to the IRS.

Previous court cases have also affirmed this rule in relation to manicures, grooming, teeth whitening and skin care, as they are considered inherently personal expenditures.

“Expenses that are inherently personal are nondeductible personal expenses,” the U.S. Tax Court ruled in a case involving a TV presenter. Such personal grooming must be 100% work-related.

Others suggest haircut write-offs are not so uncommon, especially in the media business. “If my clients are going to a premiere or a film screening, shooting a music video, or making some other public appearance, those things require them to be well groomed,” Kristin Lee, a Hollywood-based accountant with many high-profile clients, told GQ Magazine. “And that can definitely run $1,000 a pop.”

But there are enough gray areas in the IRS rules for tax deductions to allow for some unusual write-offs.

Grafton “Cap” Willey, managing director at CBIZ Tofias, an accounting and professional services provider in Providence, R.I., helped a client who had bought a house and land — and wanted to build a better house — write off the fair market value of the windows, lumber and other usable items from the property that he donated to a homeless charity.

For the purposes of any future IRS audit, especially for unusual write-offs, documentation is critical, Willey said. “Take a photo with your iPhone of that bag of clothes you donate and get a receipt,” he said. “That all counts as evidence.”

This may be the most politically and ideologically divisive of all deductions: “You can include in medical expenses the amount you pay for a legal abortion,” the IRS says. So an abortion, which can cost from $500 to $1,000, could be deductible if it were included with other medical expenses.

“ Taxpayers can also deduct the amount they pay to purchase a pregnancy test kit to determine whether they are pregnant, as well as the cost of a sterilization or vasectomy. Fertility enhancement is also included. ”

Taxpayers can also deduct the amount they pay to purchase a pregnancy test kit to determine whether they are pregnant, as well as the cost of a sterilization or vasectomy. Other items listed in the IRS medical list for deductions: artificial limb, artificial teeth (for non-cosmetic reasons) and fertility enhancement.

“You can include in medical expenses amounts you pay for an inpatient’s treatment at a therapeutic center for alcohol addiction,” the IRS adds. “This includes meals and lodging provided by the center during treatment.” Ditto drug-treatment centers.

“You can include in medical expenses fees you pay to Christian Science practitioners for medical care,” the agency also says. But you cannot include those that were paid by insurance companies or other sources, and the total medical expenses in question need to exceed 10% of your adjusted gross income (or 7.5% for people 65 or over for all medical expenses).

In 2010, the federal tax court ruled in favor of a transgender woman, Rhiannon O’Donnabhain, who had taken up a case against the IRS for refusing to allow a $5,000 deduction for $25,000 in medical expenses for gender-confirmation surgery, those costs “not compensated for by insurance or otherwise, for medical care of the taxpayer.”

In its ruling, the tax court said gender identity is widely recognized in diagnostic and psychiatric reference texts; all three experts testifying considered the case a serious medical condition, and doctors who examined O’Donnabhain found this was a severe impairment to her overall health. (Transgender activists and health professionals, however, say being trans is not a mental illness, and say, rather, that it is a gender misassignment at birth.)

What about employees and their in-house expenses? That’s a different story, and obviously those reimbursements depend on company rules. IRS rules are not always followed by people anxious to reduce their tax bills, just as human resources departments are sometimes left stunned by outlandish company expenses filed by employees.

Most people write off business lunches and work travel on their company expenses, but a study released last year suggested they also try invoicing their companies for late-night dips into the mini bar, car washes and, yes, lunches that take place in strip clubs.

The study by AppZen, which used artificial intelligence to analyze more than 3 million expense reports and flag suspicious receipts, said 46% of companies reimburse for gifts for clients and 39% do so for golf, even though playing golf for business reasons has gone the way of the three-martini lunch, particularly among younger workers.

“ One trick includes two employees having lunch together and, afterwards, one submits the credit-card receipt, while the other submits the check. Others involve workers having ‘lunch’ in a strip club. ”

Only 16% of businesses reimburse employees for room service and 15% for drinks from the hotel mini bar. Employees are, these results suggest, trying to expense some personal items. The most scandalous included a Tiffany receipt (from a gift for a woman who was not the employee’s wife) to gambling losses.

The sheer volume of expense reports helps suspect submissions slip through if they’re rubber-stamped by hand in the back office amid a pile of receipts, according to the report.

Other tricks include two employees having lunch together and, when they both get back to the office, one submitting the credit-card receipt while the other submits the actual check — perhaps making the totals slightly different by omitting or adding a different tip.

AI can sort through such expense reports faster than auditors ferreting out questionable purchases by hand, according to AppZen. Strip-club expenses are not uncommonly uncovered. “If it looks like a perfectly respectable establishment, AI will usually find out that it’s a strip club,” Jamie Barnett, the chief marketing officer at AppZen, previously told MarketWatch.

There have been several high-profile examples of egregious expenses in recent years. After making headlines on his Instagram FB, +0.68%  account and then in news outlets, then Illinois Republican Rep. Aaron Schock resigned from office in 2015 after being dogged by questions about his personal finances and expenses.

The story of Schock’s glamorous, jet-setting lifestyle gained him more than 47,000 followers on his Instagram page, which is now public again after being made private at the time, but a Washington Post story about his “Downton Abbey”-inspired office brought his expenses under renewed scrutiny.

Last year, he agreed to repay his campaign committees nearly $68,000 and work with the IRS to estimate how much he owes in taxes. If he completes this, prosecutors said, they will drop corruption charges. He was indicted on 22 counts, including wire fraud and falsification of election commission filings. He told the media at the time that “there was never an attempt by me or my staff to commit crimes.”

In 2012, Port of Oakland officials suspended then maritime director James Kwon, alleging he had filed a $4,537 expense report for a drinks and dinner reception in 2008 with clients at an establishment called D. Houston Inc.

That turned out to be the corporate name of Treasures, a Houston-based strip club. Kwon, who is now director of marketing at City Ocean International, according to his LinkedIn profile, stepped down from his role after an internal audit. (Kwon didn’t immediately respond to a request for comment.)

A Morgan Stanley MS, -2.24%  broker was fired in 2009, allegedly for submitting false expense reports. He fabricated 10 restaurant receipts in 2008 totaling $3,301 — and another 17 bogus receipts totaling $3,448, according to a 2012 hearing by the Financial Industry Regulatory Authority. He was only reimbursed $808.

The employee told investigators he had submitted false expense reports, but denied misappropriating funds. He argued that once he qualified for an expense allowance award, he was entitled to the full amount as part of his compensation package. A spokesman for Morgan Stanley told MarketWatch, “The FINRA hearing decision speaks for itself.”

But tax experts say human resources will examine expenses filed during out-of-office hours and other irregular or atypical expenses, just as the IRS will take a closer look and more likely audit write-offs that appear out of the norm.

In Trump’s case, the Wall Street Journal editorial board wrote Monday that the president’s lack of transparency with the public is at the root of the current revelations surrounding his taxes. “Mr. Trump stonewalled Congress’s patent fishing expedition on the returns, and the Supreme Court gave him a legal reprieve for a while,” the editorial said.

“But that increased the incentive to leak and publish the returns, or some version of them, close to the election. Mr. Trump could have controlled the political narrative by releasing his tax returns on his terms and timetable. Now his opponents will do it.”