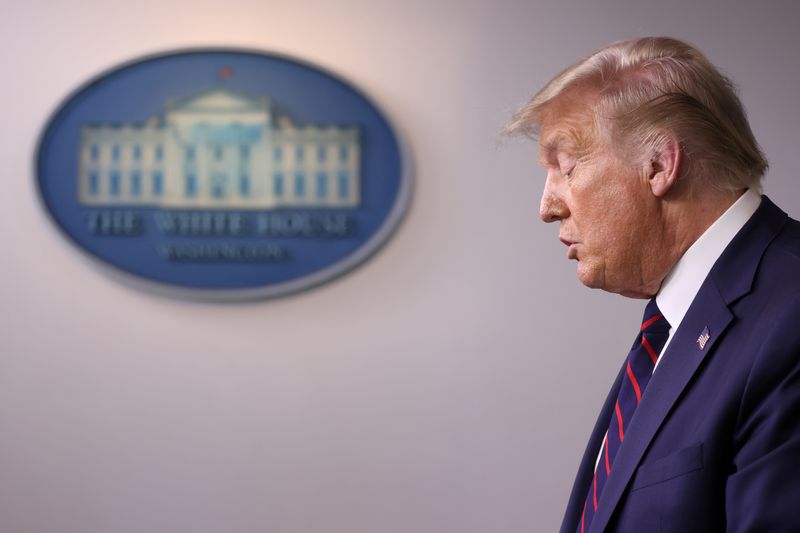 Investing.com – European stock markets traded lower Friday, with the news that U.S. President Donald Trump has tested positive for the coronavirus weighing heavily on sentiment by greatly increasing the uncertainty around the November elections.

Earlier Friday, President Trump confirmed, via a tweet, that he and his wife Melania had contracted the Covid-19 virus, just a few hours after a top aide he had spent substantial time with this week had also tested positive. However, he continues to work as normal from the White House.

“The question is how sick he gets and to what extent this is going to affect his presidential campaign,” said analysts at Danske Bank, in a research note.

“Another question is whether other members of the U.S. government are infected. The uncertainty has affected risk appetite and thus equities.”

The U.S. House of Representatives passed a $2.2 trillion Democrat-only fiscal stimulus package late Thursday. However, this bill, however, is extremely unlikely to pass through the Republican-dominated Senate, as sharp differences over the size and makeup of the package still exist.

Back in Europe, Equinor ASA (OL:EQNR) stock fell 0.5% after the Norwegian oil and gas firm outlined plans to cut its exploration staff by about 30% globally by 2023 to reduce costs as the pandemic hits the industry hard. Shares in many of the oil majors have slumped, with BP (LON:BP), Royal Dutch Shell (LON:RDSa) and Repsol (OTC:REPYY) all hitting 52-week lows in early trading. By contrast, renewables specialist Orsted (OTC:DOGEF) and wind turbine maker Siemens Gamesa  (MC:SGREN) hit new all-time highs.

Consumer inflation data for the euro zone headlines lead the European data slate Friday, but most attention will be on the official U.S. jobs report for a gauge on how the world’s largest economy is recovering.

“Jobless claims edged lower again, but remain incredibly elevated as labour market strains continue. Incomes have also been dropping back and spending growth is starting to slow as we see more evidence of a leveling off in the recovery,” wrote analysts at ING, in a research note.

Oil prices weakened Friday, continuing the selloff from the previous session, as concerns over what a resurgence in Covid-19 cases will do to the demand for crude, with the President’s infection amplifying this concern, just as production starts to rise.

U.S. crude futures traded 2.4% lower at $37.80 a barrel, while the international benchmark Brent contract fell 2.7% to $39.83. Both contracts fell more than 3% Thursday, and are on course for a second consecutive week of declines.