Home
Stocks
: Increasing funding for public colleges may improve students’ educational outcomes — and their credit scores
Prev Article Next Article
This post was originally published on this site 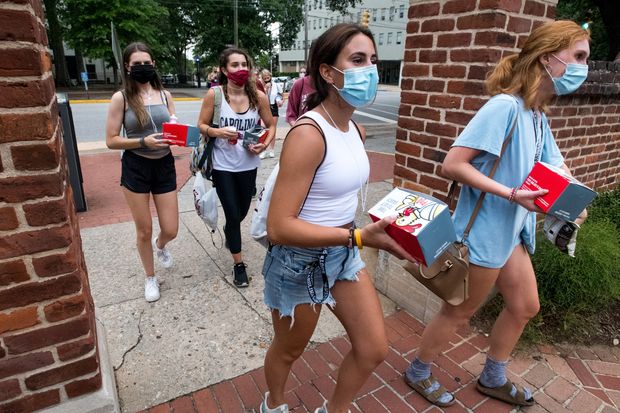 Public colleges and universities are bracing for cuts as the pandemic-induced downturn threatens state coffers, a key source of funding for schools.

And if the past is any indication, those funding declines could have consequences for students, new research suggests.

At four-year public colleges, increases to state funding are associated with students taking less time to earn their degrees and accruing less student debt, according to a working paper circulated by the National Bureau of Economic Research this week.

The paper, authored by economists at the Federal Reserve Bank of New York, Cornell University and the University of California Los Angeles, finds that for students attending two-year public colleges, an uptick in state funding increases the likelihood they’ll transfer to a four-year school and obtain a bachelor’s degree.

In addition, the research shows that among these students, higher levels of state funding are associated with higher credit scores and the likelihood of living in higher-income neighborhoods after graduation.

“State appropriations matter for student outcomes,” said Michael Lovenheim, the chair of the economics department at Cornell and one of the authors of the paper.

That finding likely has implications for the next several years.

In the wake of the Great Recession, states cut funding to higher education institutions. In 2018, state funding for two and four-year public colleges was still $6.6 billion below 2008 levels, according to the Center on Budget and Policy Priorities. Historically, following these cuts, state funding increases slowly as the economy recovers and on average don’t return to their pre-recession levels, the paper indicates.

Given these trends, the future “doesn’t look good,” for students, Lovenheim said. “That’s what our results suggest.”

For every extra $1,000 per student a state spends on its public, four-year colleges, the likelihood that a student attending one of those schools earns their bachelor’s degree by age 25 increases by 1.5 percentage points, their research shows.

An extra $1,000 in per-student appropriations also decreases the likelihood that a student attending a four-year college will take on student debt by about 2 percentage points, and the amount they borrow falls too. The research indicates that a $1,000 bump in state appropriations also reduces the amount of money these students borrow by age 22 by $640 and the amount they borrow by age 35 by $5,363.

Community college students fare differently than their counterparts at four-year public schools, but they still appear to benefit from increases in state funding.

In addition, a $1,000 increase in state appropriations is associated with a 13-point increase in credit scores for community college students and an increase of $3,359 in average income of the ZIP code where they live.

The researchers were able to observe these connections thanks to a unique merger of de-identified enrollment records from the National Student Clearinghouse and credit report data from the New York Fed’s consumer credit panel.

In addition to highlighting the broad consequences of cuts to state funding on public colleges, the research indicates that these cuts will likely exacerbate the inequality already present in the higher education system.

This dynamic shows up in the working paper. The impact of state funding cuts on four-year public schools is to increase debt loads among students, but it doesn’t appear to affect the educational outcomes, other than increasing time to degree. That’s not the case at community colleges, which have less room to raise tuition. Instead, a decline in state funding may mean slashing the kinds of academic and support services that help students get to and through school.

“Change in quality of instruction is a major factor that leads to bigger impacts not just on educational outcomes of community college students, but that actually translates to their financial outcomes later in life,” said Rajashri Chakrabarti, a senior economist at the New York Fed and one of the authors of the study. “That has clear implications on inequality.”