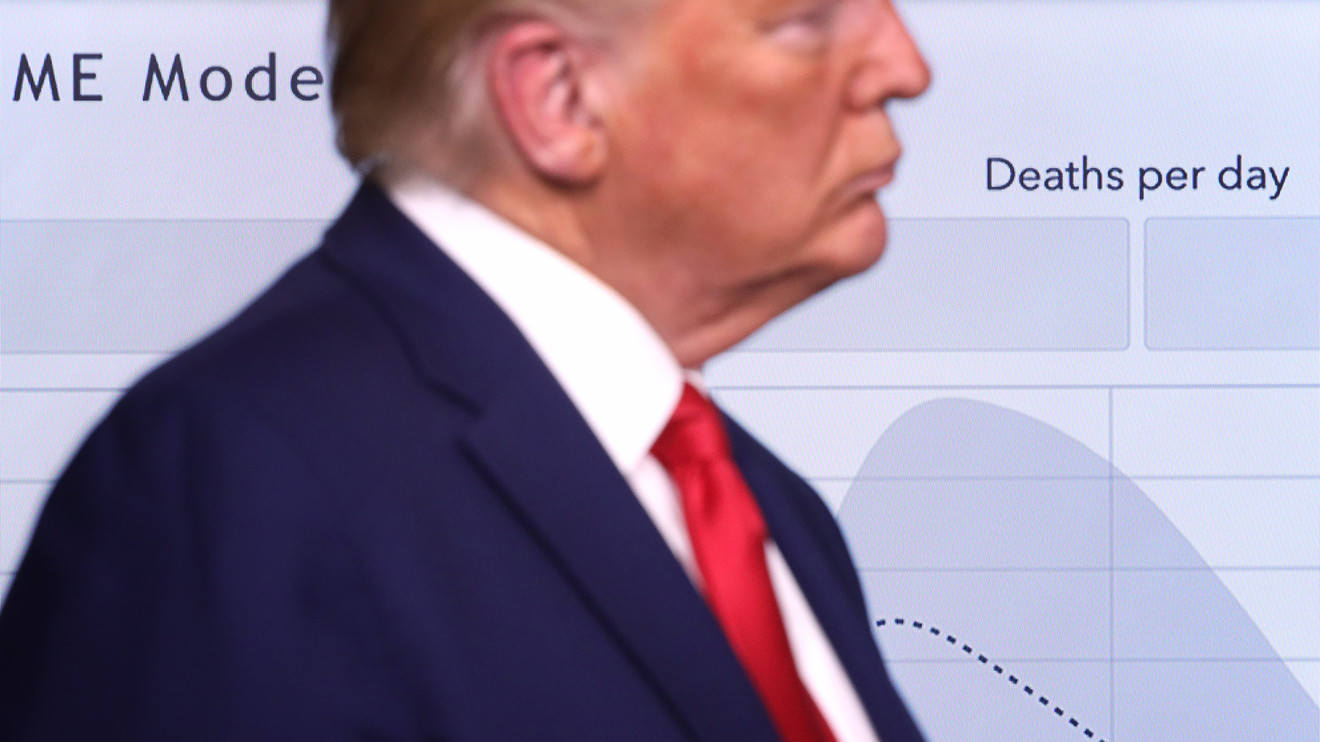 The U.S. death toll from the coronavirus illness COVID-19 rose above 221,000 on Wednesday, according to data aggregated by Johns Hopkins University, as the nation’s leading public health agency said the pandemic has likely caused the deaths of almost 300,000 Americans, including fatalities that would not have happened without the virus.

In a new study that measures excess deaths compared with an average year, the Centers for Disease Control and Prevention said the number is higher because it includes people who died from heart attacks or other medical emergencies that were untreated because people were afraid to go to a hospital.

The report found the Black and Hispanic communities were disproportionately hurt by the pandemic, in line with the evidence uncovered in other studies and reports. Excess deaths rose 33% for Black people, and were up 54% for Hispanics.

See:People of color shouldn’t be treated equally in COVID-19 vaccine trials, ER doctor says: They should be overrepresented

“These results provide more information about deaths during the COVID-19 pandemic and inform public health messaging and mitigation efforts focused on the prevention of infection and mortality directly or indirectly associated with the COVID-19 pandemic and the elimination of health inequities,” the authors wrote. “CDC continues to recommend the use of masks, frequent handwashing, and maintenance of social distancing to prevent COVID-19.”

The U.S. counted at least 60,590 new infections on Tuesday, according to a New York Times tracker, and at least 929 people died. The U.S. has averaged 60,159 new cases a day in the last week, up 36% from the average just two weeks earlier.

The Midwest has become the new epicenter in the U.S. with the Dakotas showing the highest per capita increases in the nation, followed by Montana and Wisconsin.

A weekly White House coronavirus task force report that was shared with health officials on Sunday classified 31 states as being in the “red zone,” meaning they had more than 100 new cases per 100,000 people a week ago, the Washington Post reported.

Alongside the Midwest states named above were Southern states such as Mississippi, Tennessee and Alabama.

See: Fed’s Brainard says failure of Congress on another fiscal stimulus bill would lead to ‘slower and weaker recovery’

Things are so dire in North Dakota that White House officials recommended mask-wearing and increased surveillance testing, the paper reported. The mayor of Fargo, Dr. Tim Mahoney, issued a face mask mandate on Monday but without a penalty for violators, according to local reports.

As North Dakota hospitals fill, some patients are being taken by ambulance to facilities as far away as 100 miles, the New York Times reported.

The state health department says hospitals are at about 86% capacity.

Meanwhile, rising cases in the Northeast, an early hot spot in the pandemic that appeared to get the virus under control in late spring and early summer, now means that New York could add Connecticut, New Jersey and Pennsylvania to its quarantine list as their transmission rates are high.

Gov. Andrew Cuomo said that won’t happen for practical reasons — there is a great deal of movement of people between those states — but said officials will discourage unnecessary travel between them.

• Brazil’s health minister Eduardo Pazuello has become sick with a suspected case of COVID-19, the Guardian reported. Separately, the BBC said Brazil is planning to add the Chinese-made CoronaVac vaccine to its national immunization program. São Paulo Gov. João Doria said the federal government has agreed to buy 46 million doses of the vaccine for a program that is expected to start in January. Brazil is second to the U.S. by deaths from COVID-19 and third by cases after India.

• United Airlines will on Wednesday test a digital health pass as part of a global pilot program designed to accelerate a safer opening of international borders and kick-start global travel, MarketWatch’s Lina Saigol reported. The CommonPass system is a nonprofit initiative backed by the World Economic Forum and Swiss-based foundation The Commons Project. Under the trial, volunteers on the United Airlines UAL, -0.13% flight from London Heathrow to Newark Liberty International in New Jersey on Oct. 21 will have taken a COVID-19 test up to 72 hours before traveling, and logged the results from a certified laboratory on the CommonPass app on their phones.

• Netflix Inc. reported a dramatic slowdown in new subscribers Tuesday and widely missed earnings expectations, sending shares lower Wednesday, MarketWatch’s Jon Swartz reported. Netflix NFLX, -6.64% reported 2.2 million net new subscribers in its third quarter, after two consecutive quarters topping the 10 million mark amid shelter-in-place orders related to the pandemic. The No. 1 streaming service reported net earnings of $790 million, or $1.74 a share, compared with net income of $1.47 a share in the year-ago quarter. Revenue improved to $6.44 billion from $5.25 billion a year ago. Analysts surveyed by FactSet had expected adjusted earnings of $2.13 a share on sales of $6.39 billion. Netflix warned in July that the subscriber gains it experienced in the first half of the year would likely lead to a deceleration in the second half, guiding for 2.5 million new subscribers in the third quarter. Netflix forecast 6 million new subscribers in the fourth quarter, which came up short of analysts’ average expectations of 6.56 million, according to FactSet.

• California will not open state theme parks, including Disneyland DIS, +0.43%, soon, as the state grapples with the pandemic. Parks have been closed for more than seven months. Larger theme parks such as Disneyland and Disney California Adventure, both in Anaheim; Universal Studios Hollywood in Universal City; Knott’s Berry Farm in Buena Park; and Six Flags SIX, -4.54%  Magic Mountain in Valencia, will not be allowed to open until their respective counties are in the “yellow” tier, the least-restrictive of the state’s four-tiered system guiding reopenings. Even then, capacity will be limited to 25% of normal, and reservations will be required in advance, according to California Health and Human Services Secretary Mark Ghaly. He said face masks will be required in the park, except when eating and drinking.

• Astrotech Corp. ASTC, +138.46%  said its BreathTech Corp. subsidiary signed a joint development agreement with Cleveland Clinic to explore leveraging Astrotech’s BreathTest-1000 mass spectrometer to rapidly screen for COVID-19. “The advantage of breath testing is that it is non-invasive and nonintrusive,” said Dr. Raed Dweik, chairman of Cleveland Clinic’s Respiratory Institute. “It does not have a dose limitation like X-rays, an amount limitation like blood or saliva tests, or a timing limitation like [polymerase chain reaction], blood and urine tests.”

The number of confirmed cases of COVID-19 world-wide now stands at 40.9 million, Johns Hopkins data shows, and the death toll is 1.13 million. At least 27.9 million people have recovered from COVID-19.

China, where the disease was first reported late last year, has 91,030 cases and 4,739 fatalities, according to its official numbers.

• Abbott Laboratories ABT, -2.51% posted stronger-than-expected third-quarter earnings Wednesday and offered upbeat guidance for the full year, despite the uncertainty created by the pandemic. The company received FDA emergency use authorization for its rapid COVID-19 test in August, with the test delivering results in 15 minutes. The company is now expecting full-year EPS of at least $2.35 and adjusted EPS of at least $3.55, compared with a current FactSet consensus of $3.34. “Our strong results and increased guidance are a direct reflection of our ability to innovate and deliver despite challenging conditions,” during the pandemic, CEO Robert B. Ford said in a statement.

• Amazon.com Inc.’s AMZN, -0.96% free one-hour grocery pickup is now available to Prime members at all Whole Foods Market locations nationwide. The service is available on orders of $35 or more, as customers avoid stores during the pandemic. Amazon says more than 40% of pickup orders each month are for customers who are trying the service for the first time. Online grocery use is soaring during COVID-19 with expecting sales to reach $705 billion by 2025, triple the sales of 2019.

• Baker Hughes Co. BKR, +2.34%  reported an adjusted third-quarter profit that matched expectations while revenue fell less than forecast. The company swung to a net loss as revenue dropped 34% to $5.05 billion from $5.88 billion. Oil-field services revenue fell 31% to $2.31 billion to beat expectations of $2.22 billion, turbomachinery and process solutions revenue rose 26% to $1.51 billion to top expectations of $1.35 billion and oil field equipment revenue was flat at $726 million, above expectations of $720.2 million. “After significant turmoil during the first half of the year, oil markets have somewhat stabilized. However, demand recovery is beginning to level off and significant excess capacity remains, which could create volatility in the future,” said Chief Executive Lorenzo Simonelli. “The outlook for natural gas is slightly more optimistic as forward prices have improved with strong demand in Asia and lower expected future gas production in the U.S.” Oil companies suffered a double blow in the first half as oil prices remained low and demand was hit by the pandemic.

• Snap Inc. SNAP, +34.20% crushed expectations for revenue and user growth while posting a surprise adjusted profit as consumers spend more time on phones and screens during the pandemic. The social-media company had 249 million daily active users in the third quarter, up 11 million from the second quarter. Analysts polled by FactSet were looking for 5 million net new daily active users sequentially, after Snap SNAP, -0.73% added 11 million in the first quarter and 9 million in the second quarter. Snap’s ad momentum could persist, according to JMP Securities analyst Ron Josey. “In a world where people are spending more time on phones and devices, increasingly large-scale platforms are one of the few ways advertisers can get their message across,” he told MarketWatch. “Brand advertisers rely more and more on Snap as the usage continues to improve.”

• Thermo Fisher Scientific Inc. shares TMO, +0.80% rose after the life sciences and laboratory products company reported third-quarter profit and revenue that were well above expectations during the pandemic. Among the company’s business segments, life sciences revenue roughly doubled to $3.42 billion to beat expectations of $2.90 billion and laboratory products revenue increased 19% to $3.11 billion to top expectations of $2.85 billion. Analytical instruments and specialty diagnostics revenue also rose more than forecast. “We’ve continued to meet COVID-related customer demand by launching new products across our company, such as tests and automated workflows to accurately diagnose the virus and enable society’s return to work and school,” said Chief Executive Marc Casper. “At the same time, we’re adding new capabilities, including scaling up production of sample collection products and essential laboratory supplies as well as increasing our pharma services capacity to support new therapies and vaccines.”

• Verizon Communications Inc. VZ, -0.01% delivered better-than-expected earnings for its third quarter and showed that wireless churn rates remain low during the pandemic. Verizon’s total revenue fell to $31.5 billion from $32.9 billion a year earlier, which the company attributed to “lower customer activity and the timing of certain device launches.” While Apple Inc. [s: AAPL] had some availability of its newest iPhones in the September quarter of 2019, the company delayed its annual launch of the latest models into the December quarter of 2020. Analysts surveyed by FactSet expected $31.6 billion in revenue for Verizon. The company disclosed a retail postpaid phone churn rate of 0.63% for the quarter, compared with 0.79% a year prior. Verizon also updated its guidance and now expects flat to 2% growth in adjusted earnings per share for the whole of 2020. Previously the company has been forecasting growth of negative 2% to 2%. Verizon anticipates fourth-quarter total wireless service revenue growth to be up at least 2% from the same period last year.