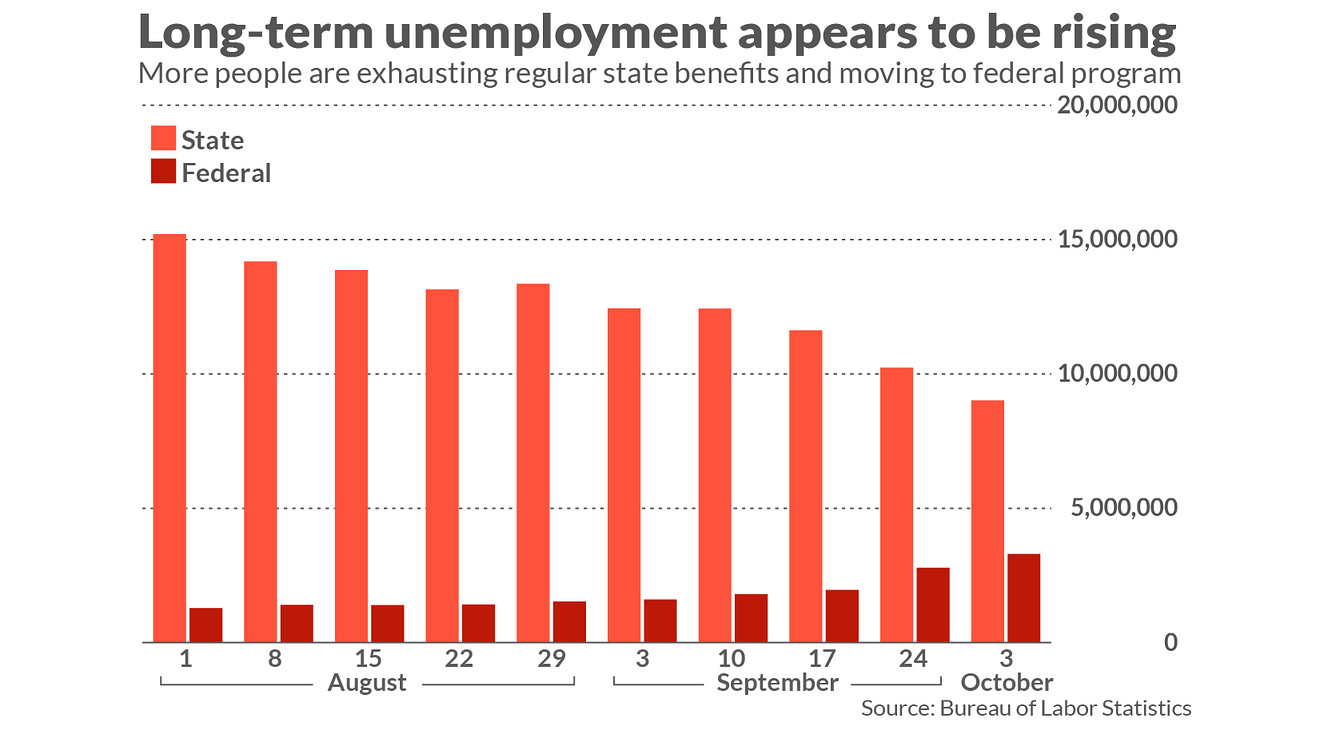 The number of jobless Americans getting unemployment compensation fell by more than 6 million from August to early October, but at least one-third appear to have simply exhausted their state benefits and shifted to a temporary federal-relief program.

What it signals, economists say, is the decline in existing jobless claims is not quite as good as it looks. More people are going back to work or finding new jobs, to be sure, but the labor market is not recovering as rapidly as it was during the summer.

And:‘I’m terrified, frankly’: These people are depending on another stimulus to stay afloat

The higher flow of people into the federal program, what’s more, also points to an increasing number of people who face the prospect of long-term unemployment. They would have exhausted the 26 weeks’ worth of jobless benefits typically provided in most parts of the country, and in some cases, even used up an extra 13 weeks of compensation that states can offer in times of particularly high unemployment.

Read:Jobless claims sink to pandemic low of 787,000 as California comes back on line

The government’s data on continuing federal jobless benefit claims is reported with a two-week lag, so the most recent comparable figures available are for Oct. 3.

Let’s look at the numbers, using actual or unadjusted data.

So-called continuing jobless claims provided by the states fell from 15.2 million on Aug. 1 to 9 million as of Oct. 3. That’s a 6.2 million decline.

Yet during the same period the number of people who began to receive extended benefits through a temporary federal program, called Pandemic Emergency Unemployment Compensation, climbed to 3.3 million from 1.3 million.

That’s an increase of 2 million, but the actual figure is probably higher by several hundred thousand. Three states, including Florida, Georgia and Kentucky, did not report how many people were getting extended federal benefits.

The decline in total jobless claims — state and federal combined — is undeniably good news. It suggest the economy continues to regain jobs and recover from the coronavirus pandemic.

“What we see is even with PEUC rising there has still been a very notable improvement in continuing claims,” said Tom Porcelli, chief U.S. economist at RBC Capital Markets.

Still, the sharp increase in people getting federal benefits is a worrisome sign. It means they have lost their old job permanently or can’t find a new one.

“Some of the unemployed are being rehired, but it is still going to take years for the labor market to fully recover from the viral recession,’” said chief economist Gus Faucher of PNC Financial Services.

The federal program is also set to expire on Dec. 31. Millions of unemployed Americans could face even greater hardship right after Christmas if it’s not extended.

A number of large companies have announced major layoffs since September and Congress is stalemated on the passage of another fiscal stimulus package, raising the specter that the economic recovery could flag.