Home
Stocks
: European economic recovery was swift — but here’s why it will be short-lived
Prev Article Next Article
This post was originally published on this site 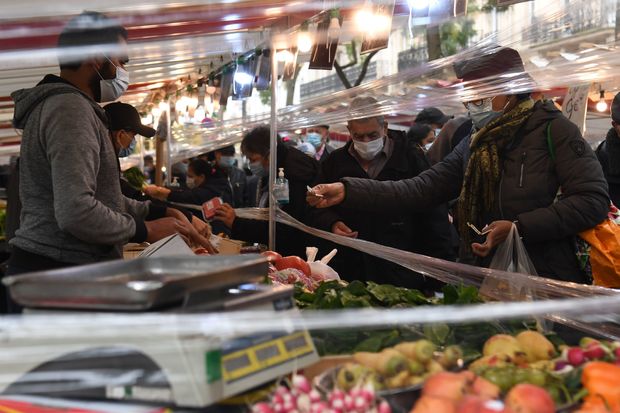 Parisians shop at an open market in Paris on the first day of a second national general lockdown aimed at curbing the spread of COVID-19 infections.

The European Central Bank’s governing council said on Thursday that it would “recalibrate” its monetary policy tools at its next meeting on Dec. 10. ECB President Christine Lagarde said the move was needed in light of the “clear deterioration” of economic prospects expected in the last months of the year.

The outlook: Consumers spent in the third quarter the forced savings they had accumulated during the previous series of lockdowns. Now analysts expect the eurozone economy to tank again in the last months of the year. Fears of the COVID-19 pandemic may again add a demand shock to the supply shock created by the new restrictions.

But the question the ECB will first have to answer at its December meeting is whether it can really do anything to counter the second slump. Lowering the cost of credit is not what the eurozone economy may need, if the future gets darker for businesses that already took on debt during the first phase of the recession. More than ever, it looks like governments will have to pick up the baton with even more expansionary fiscal policies.

Opinion: France and Germany order lockdowns — but is France too late and facing another economic shock?