Home
Stocks
: Markets are acting as if the polls are tilted to Biden, Goldman Sachs analysts say
Prev Article Next Article
This post was originally published on this site 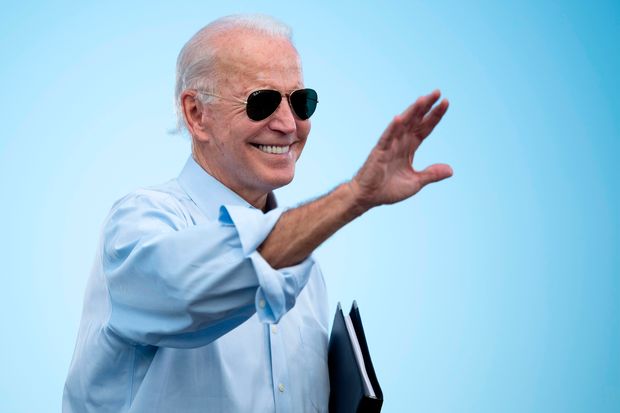 Former Vice President Joe Biden gestures to the crowd before delivering remarks at a drive-in event in Coconut Creek, Fla., on Thursday.

Former Vice President Joe Biden is favored to win the U.S. election no matter if you look at betting markets or polling. But the hard money on the election isn’t nearly as tilted toward Biden as polling would indicate.

Goldman Sachs analysts Blake Taylor and Alec Phillips say prediction models maintained by data journalists and academics put the probability of a Biden win above 80%. But prediction markets suggest the election outcome is still highly uncertain, implying just over a 60% chance that Biden will win the Electoral College.

One reason, they say, is just how the Electoral College works, that it weights bigger states rather than total voting margins. In so-called tipping-point states, Biden enjoys a five- rather than nine-point lead. In 2016, while polls were off by one or two points nationally, they missed their marks by an average of 4 points in Wisconsin, Michigan, Pennsylvania and Florida. 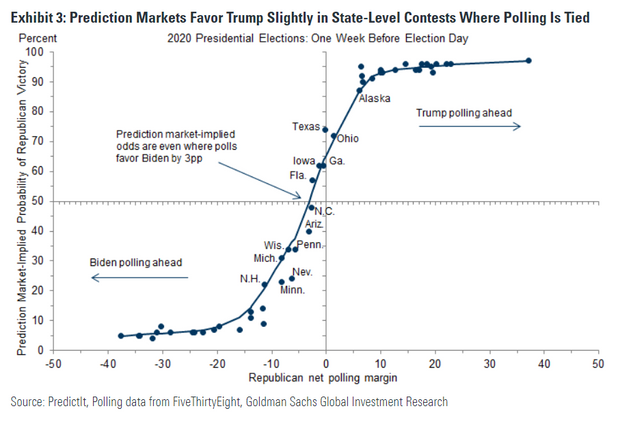 The Goldman Sachs analysts say markets are expecting President Donald Trump to outperform the polls, by about three percentage points. One possible reason is the so-called shy Trump voter who might not be willing to express support for the Republican candidate aloud. Goldman Sachs ran its own experiment using the gap between live interviews and automated or online polls, and found a one- or two-point gap, though the analysts caution that could be statistical noise. Another issue, the Goldman analysts say, is polling error based on incorrect turnout assumptions.

The large differential in voting method between the parties creates additional uncertainty, with Democratic voters more likely to be impacted by problems with, or legal challenges to, voting by mail, they say. By contrast, the recent COVID-19 resurgence could reduce Republican turnout.

The S&P 500 SPX, -0.62% has dropped 4% over the last five sessions, though traders also have had to consider fresh European lockdowns, surging U.S. coronavirus cases and an impasse in U.S. fiscal stimulus talks.