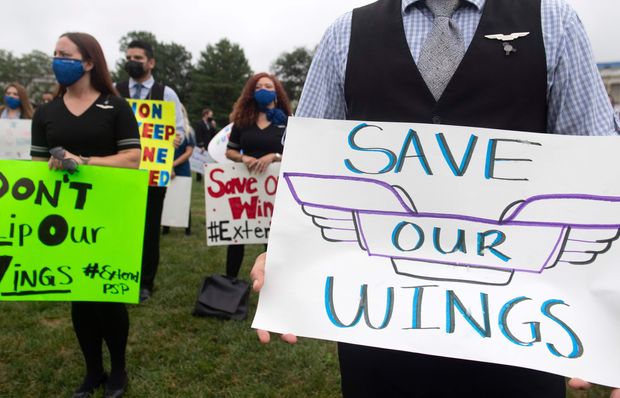 The latest coronavirus outbreak is threatening to cause more layoffs and job losses.

The numbers: New U.S. applications for state unemployment benefits rose in mid-November for the first time in more than a month, pointing to added stress on the economy from a record increase in coronavirus cases.

Another 320,237 people applied for benefits through a temporary federal-relief program that expires at the end of the year, the government said Thursday.

Read: U.S. retail sales get boost from Amazon Prime Day in October, but not much else

What happened The combined number of new state and federal jobless claims have yet to fall below 1 million a week since the onset of the pandemic.

The number of people already collecting state-provided benefits, meanwhile, fell by 429,000 to a seasonally adjusted 6.37million in the week ended Nov. 7. These are known as continuing claims.

Federal continuing claims rose by an unadjusted 233,458 to 4.38 million in the week ended Oct. 31, the latest data available .

The number of people receiving these federal benefits has more than tripled since August, underscoring the fragile nature of the labor market. A growing number of workers still can’t go back to work and face the permanent loss of their jobs. Others simply can’t find anything available.

Altogether, the number of people receiving benefits from eight separate state and federal programs declined by 841,245 to an unadjusted 20.3 million as of Oct. 31. It’s unclear how many people exhausted benefits or found work.

Some economists question the accuracy of the total estimate since other government data indicates unemployment is significantly lower.

Big picture: The economy has been regaining jobs at a steady pace since a big burst of hiring when the U.S. reopened in May, but the record crest in coronavirus cases threatens to freeze or even partly undue the progress if more cities and states impose restrictions on business.

The U.S. is still missing some 10 million jobs that were lost during the early stages of the pandemic and unemployment remains very high. Extended federal unemployment benefits will also run out in late December unless Democrats and Republicans break a months-long deadlock over the next relief package.

What they are saying? “The uptick in claims is a sign of the impact the new shutdowns and restrictions are having on the job market,” said senior economist Jennifer Lee of BMO Capital Markets.

“The combination of record coronavirus cases and the post-holiday winter months will likely be a grim time for the labor market,” said AnnElizabeth Konkel, an economist at Indeed Hiring Lab. “To lose unemployment benefits right after the holidays will only ratchet up the economic pain already felt by millions.”