Home
Stocks
CityWatch: Autumn of Doom gets real in New COVID City
Prev Article Next Article
This post was originally published on this site 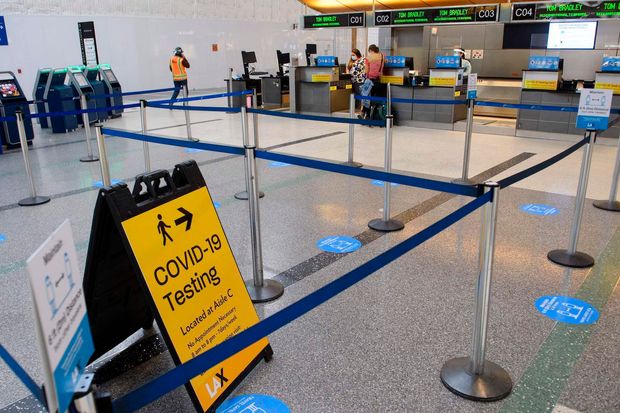 There’s now a test-out alternative to the 14-day quarantine for people traveling to New York.

It’s not the kind of headline you want to see the Friday before Thanksgiving, 625 miles from home.

“CDC recommends against traveling for Thanksgiving.”

But there it was, in an almost empty hotel lobby in Charlotte, North Carolina, as the Centers for Disease Control and Prevention, not to mention the mayor of New York City, were urging something they weren’t calling lockdowns but sure seemed to involve a lot of sheltering in place.

In case there was any confusion about the fresh urgency, the recommendation was illustrated by a simple graphic: An airliner behind a big, white X—made from a crossed pair of long, cotton swabs, just like the ones that had recently paid a visit up my nostrils for a pre-travel coronavirus test.

The CDC had already been highlighting the risks of holiday travel as the infection numbers spiked again, ticking off such familiar precautions as wearing a mask, washing hands, getting a flu shot and checking local restrictions. But as Thanksgiving got closer, the federal docs were turning the alarm bells up a few decibels: “Postponing travel and staying home is the best way to protect yourself and others this year.”

That was all well and good for people already safely at home, now with a brand-new excuse for not seeing relatives they didn’t want to see anyway. But what about those who are out of town. What about us? What exactly are we coming home to? Should we shelter in place right where we are?

See: Here are all the reasons why COVID-19 cases are surging again

Mayor Bill de Blasio sounded a little defensive talking on TV, as New York City parents were calling him out for canceling classroom instruction in the nation’s largest public-school system and ordering the last 300,000 in-person students back to their laptops, iPads and cramped city apartments.

“Shut the bars down,” demanded New York mom Reshma Salman, standing in front of what looked like City Hall. “Close the restaurants. Close the gyms. Ban indoor dining. But do NOT close the schools.” She was surrounded by a large group of other parents, who sounded similarly perturbed.

The mayor immediately expressed sympathy for the parents, and then summoned his go-to pandemic move: blaming Gov. Andrew Cuomo for as much as possible. Said de Blasio: “It’s just a matter of time” before Cuomo sees the light, declares all of New York an “orange zone” and shutters the restaurants, bars, hair salons and gyms.

But are those moves really necessary? Are they inevitable?

Compared to most places, New York is actually holding up fairly well as the long-anticipated Autumn of Doom finally arrives. Holding up comparatively well so far. You always have to add so far.

The state’s 2.88% positivity rate is little more than a rounding error compared to the viral cauldron that is South Dakota, where 56% of the coronavirus tests are coming back positive. In Kansas, it’s 43%. But with 584,128 coronavirus infections and 33,648 COVID-19 deaths since the virus took hold in the spring (293,592 and 24,167, respectively, in the city), New Yorkers know more about the ravages of this disease than people anywhere else. The New York trip wires are more sensitive as a result.

Too sensitive, the parents say. Or at least poorly laid.

The positivity rate in the schools is even lower than in the city at large. And like all things in New York, the effects of this latest move are unevenly distributed. A classroom closure is one thing in a neighborhood with nannies and home-school tutors, where the parents are having Zoom ZM, +6.10% conferences from the home-office nook. It’s something quite different for hospital workers, transit employees, retail clerks and other parents who have no remote-work option and can’t afford to call in sick.

Get a positive test three days before departure. Get a second test on the fourth day after arriving in New York. Like “good time” in a state prison, two negatives are a get-out-of-quarantine-now card, shrinking the 14-day lockdown to as few as four days.

The line at the StarMed Healthcare drive-through on Johnston Road in Charlotte was about 20 cars long. But two swab pokes later, the rapid-test results were back in 15 minutes.