Home
Stocks
CityWatch: For New Yorkers, obstacles mix with opportunity in a COVID-derailed holiday season
Prev Article Next Article
This post was originally published on this site 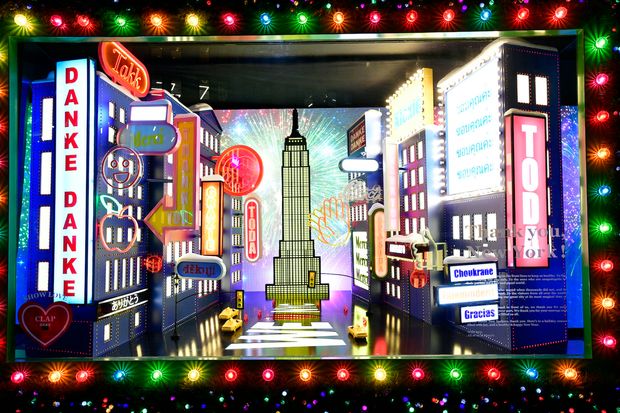 The window displays at Macy’s Herald Square are dedicated to thanking essential workers and first responders.

Holiday spirit in 2020? It could be as hard to come by as hand sanitizer and paper towels were last spring.

For New Yorkers drained and depressed after months of tragedy, lockdowns, protests and a crumbling economy, the holiday season — just as COVID-19 cases are surging — brings more mental and practical challenges in a year already overflowing with them.

Public schools are closed again; more restrictions could be next. Many holiday events have been canceled. Heading out of town or attending even small parties can endanger you and others. Add in the darker, colder days and some “COVID fatigue,” and you’re traveling a toxic road headed straight toward some unprecedented holiday blues.

Fifty-nine percent of New Yorkers, down from 71% last year, are “somewhat or very excited” about the holiday season, according to a Siena College Research Institute statewide poll released Wednesday,

Over a quarter of New Yorkers say “that no matter how hard they try, the pandemic will take the joy out of the holidays,” said the group’s director Don Levy in a news release.

Iconic events like Macy’s M, -1.41% Thanksgiving Day Parade and the Times Square New Year’s Eve ball drop that normally draw hundreds of thousands will be virtual. While some popular pop-up holiday markets, like those in Union Square and Columbus Circle, won’t be offering food, knickknacks and other goodies to Manhattan shoppers this year.

If there was ever a year that a holiday lift was needed, this is it. But almost cruelly, everything you might associate with celebrating the season is either prohibited or just an outright bad idea. Big parties: nope. Spending infinite hours in stores or a shopping mall: You need to get in and out quickly with your mask on, of course. Want to go to mass? Just a handful people at a time are allowed. Choirs singing holiday carols can potentially spread the virus to everyone around them.

And though the second wave of the coronavirus is colliding with the holiday season, there could be a miracle that goes beyond 34th Street. Considering the number of events that actually are happening combined with the fewer tourists, 2020’s holiday season is a rare opportunity for New Yorkers to enjoy their city in ways they couldn’t before, and safely, said Chris Heywood, executive vice president of global communications for NYC & Company, the city’s tourism and marketing arm.

“We are committed to making sure the holiday cheer will remain intact,” he told MarketWatch earlier in November. “It’s not going to be a consolation prize for people to be in New York this holiday season.”

Tourism — a key driver to the economy that also keeps the city buzzing — is projected to be down 66% compared with last year, according to an NYC & Company report.

“It’s not going to be the usual crowds we get every year, [a season] defined by gridlock in Manhattan,” Heywood said.

“What we want to say this year is don’t be afraid to come to Midtown Manhattan and support local businesses, shop in our stores, dine in our restaurants, go to some of these holiday markets and support the small businesses,” Heywood continued.

Midtown won’t be a ghost town

Canceling the tree, which draws constant shoulder-to-shoulder crowds in normal years, would have been a tremendous blow to the city, Heywood said.

“It would be devastating,” he said. “This is a very extraordinary compromise that these events are still happening in the format that they are. If they weren’t happening, it would be a devastating blow to a lot of people. And I just applaud that the organizers are doing what they can and under tough, tough financial circumstances take to, to preserve their brand, to keep the spirit of the holidays alive.”

This year’s Norway spruce, 75-feet tall and brought down (with an owl stowaway) from Oneonta, New York, will be lit on Dec. 2, but not with the usual bash that sends tens of thousands into Midtown; no onlookers are allowed.

The city is still working out how New Yorkers can enjoy the tree following its lighting safely, the mayor said Tuesday. And organizers have not released details yet on the lighting ceremony. Representatives for Tishman Speyer, which oversees the tree lighting, did not return requests for comment.

In classic New York fashion, New Yorkers have already mocked on social media its shoddy appearance, comparing it to the Charlie Brown tree, and calling it a metaphor for a year from hell.

Jerome Barth, president of the Fifth Avenue Association, said the tree is the “main artery for the enjoyment of the holiday.” The high-end stores near the tree on Fifth Avenue — including Tiffany’s TIF, -0.07%, Bloomingdales and Saks — typically draw hundreds of thousands a day with their traditional window displays. Barth said the windows of those stores will indeed be filled with their famous exhibits, and there will be measures to keep people socially distanced as they take them in those holiday visions. While he conceded the city will need to figure out how to keep crowds under control in the shopping district, he noted that with fewer tourists there’s plenty of room on the sidewalks, plus New Yorkers are savvy social distancers.

“Fifth Avenue is the greatest retail street in America, and it is an outdoor environment,” he said. “You get the best of both worlds, as you can enjoy people watching in this dynamic place while still shopping, frequenting a restaurant or taking in the holiday décor.”

“The stores themselves are practicing the best safety protocols and limiting the number of guests inside at any one time,” he added, noting that merchants are hoping “people will be in a giving mood” to help alleviate what 2020 has done to their sales.

Macy’s holiday window, a New York tradition since 1874, also returned Thursday at its Herald Square store, and this year the displays are honoring essential workers and first responders. (A representative from Macy’s did not respond to a request for comment about the store’s other plans for the season.) The window displays at Macy’s Herald Square, one holiday tradition that has survived in 2020.

Among the dozens of holiday attractions in the city this year include: the skating rinks at Bryant Park and Rockefeller Center; the Winter Village, again at Bryant Park; the Grand Central Terminal Holiday Fair; holiday tours and the Hanukkah Family Experience at the Jewish Children’s Museum in Brooklyn.

Overcoming the unique mental challenges of holidays in 2020

“There’s probably two levels at which people are going to feel this psychologically,” he said. “The first is that people are just stressed out and these are sources of fun and, and a way to connect and be part of your community. And people will lose out on those, and that’s part of the stressful situation we’re in.”

Also at risk is city residents’ identity as New Yorkers. There’s been much talk about New York not being able to return to its former glory, and major events being canceled are a reminder that the city’s just not back yet.

Bavel said that even if you don’t normally attend events like the parade or the ball drop, just the fact that they’re not happening as usual can have a psychological impact.

“Since these are often distinctly New York events, they are part of how we see ourselves and what we’re over known for. That could be a blow to the collective identity of many New Yorkers,” he said.

New Yorkers, and of course tourists, also won’t be able to see the “Nutcracker” at the New York City Ballet, the Radio City Christmas Spectacular, or enjoy the wonders of SantaLand at Macy’s Herald Square.

All may seem to be lost, but being cooped up inside your homes for all of December watching Hallmark movies doesn’t have to be the way you end 2020, as long as you’re smart about enjoying what’s left to enjoy. And that includes seeing loved ones.

Read: How to protect your mental health and fight ‘COVID fatigue’ this winter

The mayor earlier in November acknowledged how upsetting it will be for people to not see family and friends this year.

“I’m not going to see some of the people I love the most for Thanksgiving and Christmas, and it pains me. It really does,” he said during a news conference when asked about the no-travel guidance.

The state has mandated a 10-person maximum for home gatherings, though how that will be enforced remains in question. Also, New Yorkers at large will miss out from attending religious services, which still face strict capacity restrictions. In high-risk red zones, for instance, only 10 people can attend a service. More are allowed in lower risk, orange and yellow zones. Otherwise, indoor capacity is at 33%.

Obviously, the massively attended masses at religious institutions will have to be reimagined, and without a doubt most parishioners must find other ways to worship.

Dr. Krystal Lewis, a clinical psychologist and researcher with expertise in stress and anxiety based in Maryland, said while some people have been able to prepare mentally for an alternative holiday season, it could prove to be a struggle for others.

“For others who may be already struggling with symptoms of anxiety, depression, trauma… those can be exacerbated by the loss of the holiday tradition,” she said.

Lewis suggested New Yorkers be creative and try to shift to outdoor activities to give them a little holiday spirit.

“It’s still important to figure out ways to have some social contact,” Lewis said. “So that might be trying to go on walks, see if you can see any of the Christmas lights, try to do some of those festive things outdoors… If you have a car maybe drive out to the suburbs or Long Island at Christmas lights that people are putting up on their homes.”

Though you might foster some holiday cheer with such experiences, friends and family are irreplaceable. And that might be the greatest mental challenge of all, Bavel said.

“If you don’t [normally] see your extended family every day, you don’t feel their absence,” Bavel said. “But if you’re not with them on a big holiday, like Christmas or Hanukkah or Thanksgiving, that’s when it might be really sad not to have that family tradition.”