Home
Stocks
Need to Know: What’s next for markets after Treasury Secretary Steven Mnuchin pulls the $455 billion plug
Prev Article Next Article
This post was originally published on this site 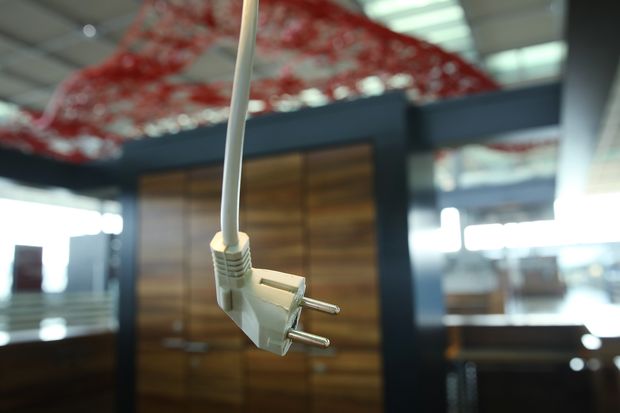 No longer connected — the Treasury says the Federal Reserve can’t continue with its corporate bond backstop program beyond the end of the year.

After markets closed on Thursday, Treasury Secretary Steven Mnuchin surprised the financial world, saying he would not extend authority beyond the end of the year for the Federal Reserve to backstop corporate credit as well as the Main Street and municipal lending programs. Mnuchin asked for the Fed to return the roughly $455 billion of unused capacity to the Treasury.

The Federal Reserve swiftly put out a statement saying it “would prefer that the full suite of emergency facilities established during the coronavirus pandemic continue to serve their important role as a backstop for our still-strained and vulnerable economy.” Fed Chair Jerome Powell on Wednesday had stated a need for the programs to continue.

The intent of the Mnuchin move appears to be to prevent the next Treasury secretary extending relief to state and local governments, and had been urged by Sen. Pat Toomey, the Republican senator from Pennsylvania who is set to chair the Senate Banking Committee, unless the Democrats win both the runoff elections in Georgia in January.

Mnuchin’s own letter explained the firepower of these facilities and how they helped reduce interest rates on a variety of instruments.

“Mnuchin’s move will tighten financial conditions and removes a safety net for markets at the wrong moment,” said Krishna Guha and Ernie Tedeschi, analysts at Evercore ISI. “One side effect is that it increases the likelihood that the FOMC [Federal Open Market Committee] will strengthen QE [quantitative easing] in December, with additional duration and guidance, and if things get bad enough, a faster pace of purchases too. However, QE is a very imperfect substitute for a credit market backstop.”

“The risk is multifold including rising yields for struggling companies, constrained access to credit for small and medium-sized businesses and exacerbated financial difficulties for budget-constrained municipalities,” added Gregory Daco, chief U.S. economist at Oxford Economics. “If financial markets perceive the Fed’s position as having been substantially weakened, then weaker economic activity, and the prospect of expiring eviction and foreclosure moratoria, student loan repayment relief ending and 12 million unemployed individuals losing their benefits at year-end could lead to tightening financial conditions.”

The Mnuchin letter did point out the Fed could use what are called core ESF funds, a reference to the exchange stabilization fund that is designed to fund any action to intervene in currency markets, if it needed to re-establish any facility. The Evercore analysts, however, point out there is only around $10 billion in government securities in this fund, though the Fed could swap International Monetary Fund special drawing rights to expand capacity. 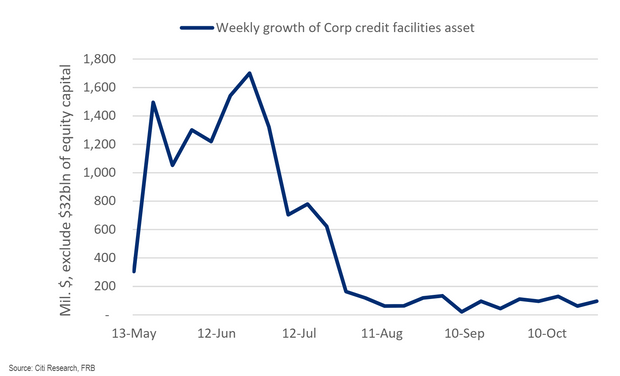 Andrew Hollenhorst, chief U.S. economist at Citi Research, said these backstops weren’t being used much in recent months. “The direct market impact should therefore be limited, although risk asset prices retreated on the indirect impact of a less-firm backstop. Treasury yields fell, partly on the risk-off but also because freeing up Treasury capital would mean less Treasury debt issuance,” he said.

There will be more fireworks in the future — Powell and Mnuchin will testify jointly to the House Financial Services Committee on Dec. 2, on oversight of the Treasury Department’s and Federal Reserve’s pandemic response. House Financial Services Chairwoman Maxine Waters, a California Democrat, made no secret of her feeling toward Mnuchin — “he will be held to account for this legally dubious and flagrantly destructive recommendation.”

There will be plenty of possibility for more reaction to the Treasury news, with public engagements from four regional Fed presidents. On a related note, President-elect Joe Biden said he has picked his nominee to be the next Treasury secretary, and will announce the decision either just before or just after the Thanksgiving holiday next week.

California announced a new curfew set to start on Saturday in response to growing coronavirus cases in the largest U.S. state by population. The U.S. set a record on Thursday for both new cases and hospitalizations, according to the COVID tracking project.

A European Union meeting failed to resolve Hungary and Poland’s veto over the €750 billion recovery fund. European Commission President Ursula von der Leyen separately said the vaccine from drugmaker Pfizer PFE, -0.35% and partner BioNTech BNTX, +4.96%, as well as the one from biotech Moderna MRNA, +4.36%, could get regulatory approval in the latter half of December.

Cybersecurity provider FireEye FEYE, may advance, after announcing a $400 million investment from a Blackstone-led group, which it will use to fund a $186 million acquisition of a cybersecurity-investigation automation company.

The SPDR Bloomberg Barclays High Yield Bond ETF JNK, +0.35% will be one way to monitor how the lack of a Fed backstop impacts the most sensitive part of the corporate bond market. 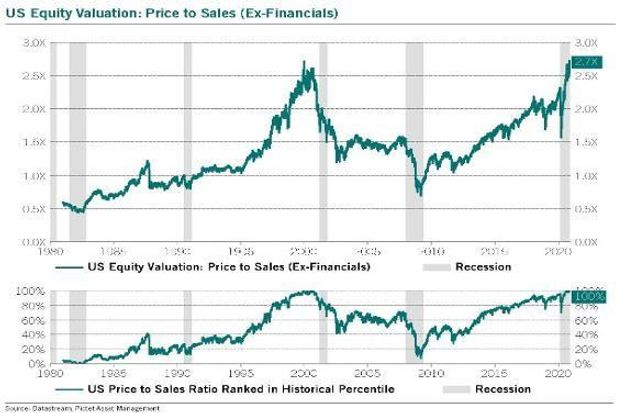 Doug Kass, president of hedge-fund manager Seabreeze Partners Management, highlights this chart from Swiss fund manager Pictet, showing that price to sales outside the financial sector is at the 100th percentile of its historical distribution in over four decades of the statistic being recorded. Kass says he is shorting equities, despite growing bullish commentary from sell-side strategists. “Price is what you pay, value is what you get,” he quips.

The BBC said it won’t play the original version of “Fairytale of New York” this Christmas on one of its radio stations, so as not to offend younger listeners.

Leonardo da Vinci’s drawings contain an “unexpected diversity of bacteria, fungi and human DNA,” though not from the Mona Lisa painter himself.