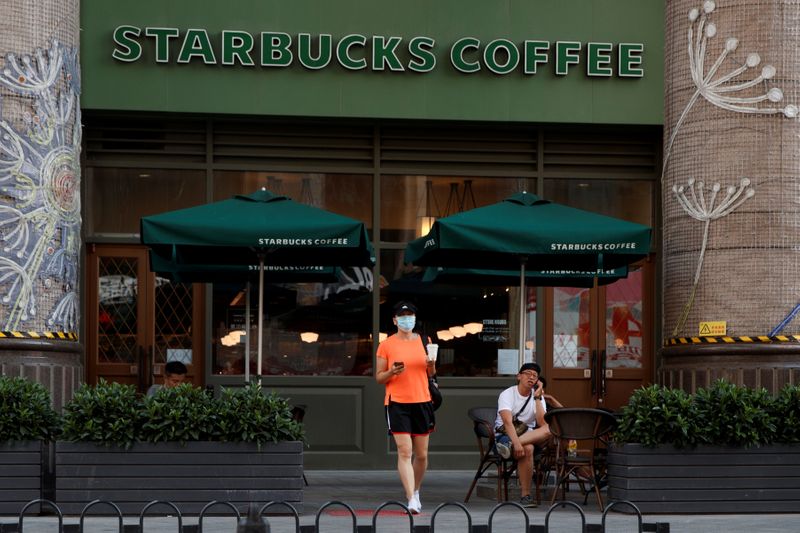 NEW YORK (Reuters) – Starbucks Corp (NASDAQ:SBUX) Chief Executive Officer Kevin Johnson said customers will flock back to cafes once the coronavirus pandemic is over, even as the company builds more walk-thru locations without seating in major cities.

After efforts to expand U.S. suburban drive-thru locations, the world’s largest coffee chain is creating a similar experience for customers on foot. Orders are to be primarily digital, paid for in advance, as the company shifts to new store formats in response to changing habits.

“What we’re trying to do is build the equivalent of a drive-thru in a dense metropolitan area, which I think of as a walk-thru,” Johnson told Reuters in an interview ahead of the company’s biennial investor day Wednesday.

Within a three- to five-minute walk of these locations will be traditional Starbucks cafes, Johnson said.

Broadly, Starbucks is closing some underperforming locations and relocating others, while adding new to-go locations, traditional cafes and suburban drive-thrus where possible.

It expects to grow nearly 70% to 55,000 locations globally by fiscal 2030. It is among several big restaurant chains likely to become even larger after the pandemic.

Even so, that is about 6% of net store global growth annually starting in 2022, at the lower end of a previous growth range of 6% to 7%.

On Wednesday, Starbucks said it will launch oatmilk in all U.S. stores in the spring of 2021 and roll out new menu items, including a Shaken Iced Espresso with brown sugar and oatmilk.

The company reiterated previous guidance of adjusted profit for fiscal 2021 between $2.70 and $2.90 per share.

For future growth, Johnson said Starbucks will lean on artificial intelligence – a suite of products Starbucks calls Deep Brew – to give store managers an edge in how they run their locations. The goal is not to displace employees, but to have them focus on customer service instead, he said.

The technology can create staff schedules and automate inventory management. It is already used to generate personalized deals for Starbucks Rewards members.

And Starbucks is using AI to assess local COVID-19 cases, customer preferences and employee sentiment in order to recommend, on a store-by-store basis, whether and how to slowly reopen locations.

“We’ve got a way to navigate through this virus,” he said. “And certainly as vaccines come and we start turning up the dial, I have no doubt in my mind the customer response coming to Starbucks is immediate, because we have seen it as we open up limited seating.”