Home
Stocks
Key Words: Is Tesla the next AOL? That’s what this strategist is warning
Prev Article Next Article
This post was originally published on this site

That’s Chris Harvey, head of equity strategy at Wells Fargo Securities WFC, -1.68%, talking to CNBC about how Tesla’s TSLA, +2.44% recent inclusion in the S&P 500 SPX, +0.35% is reminiscent of the final days of the dot-com bubble. Specifically, Harvey, in highlighting Well Fargo’s top 10 predictions for 2021, drew a comparison between Elon Musk’s electric-car company and AOL , a poster-child of the Internet frenzy decades ago.

“AOL, similar to Tesla, had a game changing technology, incredible performance… it goes into the index late in the year in December after an amazing run,” Harvey said. “But it was a seminal event.”

Following its relentless rally in the late 1990s, AOL, like many causalities of the dot-com bubble, failed to keep up with the times, which is a risk that Tesla, up almost 700% this year, also faces in the coming year, he explained. “After ’99, many tech and growth companies lost 50% to 100% [of value],” Harvey said. “We’re thinking in 2020, everything happens much faster. So, if it took 12 months for the end to begin, now it’s going to take six months.”

For Harvey, better places for investors to look include cyclical, “COVID-beta” names. “Old economy, not new economy,” he predicted. Here’s the CNBC roundup of the full list: 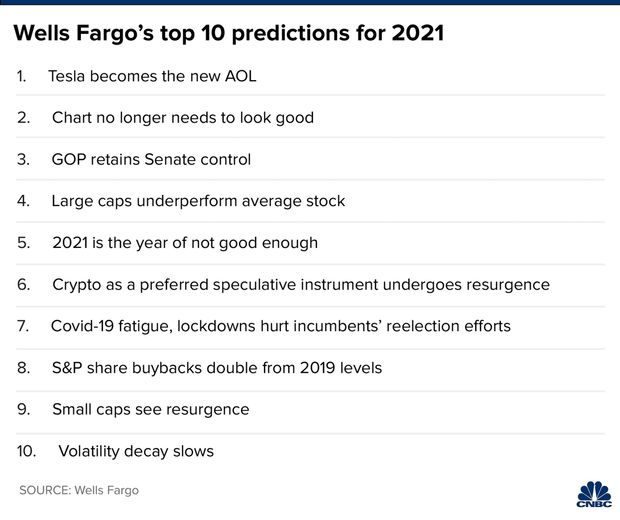 For more on Harvey’s thoughts on Tesla and 2021, watch the interview: