Home
Stocks
Mark Hulbert: Wall Street is wrong: Copper prices can’t tell you where the stock market is headed
Prev Article Next Article
This post was originally published on this site

CHAPEL HILL, N.C. – If “Dr. Copper” is to be believed, we should get ready for some very good times directly ahead.

I’m referring to Wall Street lore that says copper HG00, -3.76% has a Ph.D. in economics and a supposedly uncanny ability to predict turning points in the economy and, by extension, the stock market. The story the metal is currently telling is incredibly bullish: It has gained more than 20% just the since the start of the year and doubled over the last year. It is now within shouting distance of its all-time high from 2011.

On first pass, it certainly appears as though copper’s forecasting abilities are as strong as ever. The S&P 500 SPX, -0.48% is up over 70% since its low last March. But the claim on which copper bases its Ph.D. is that it can forecast the future, not that the stock market merely rises in lockstep with the metal. 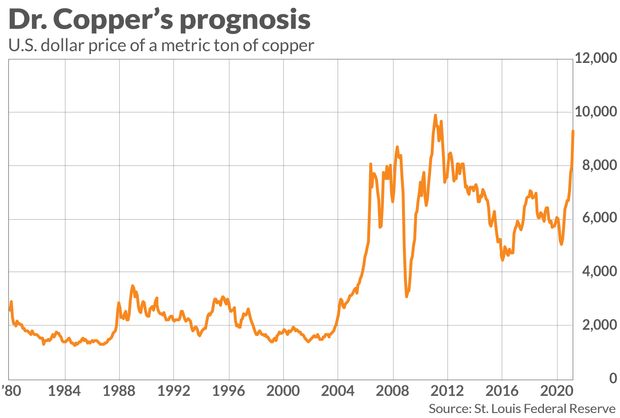 A cursory glance at this chart is probably all you need to question copper’s forecasting prowess. Copper hit its all-time high in 2011 and then turned down. Followers who took that as predicting a turning point in the economy and the stock market lost out on one of the most sustained economic booms in modern U.S. history and one of the most impressive bull markets on Wall Street.

This is just one data point, of course. But it’s more the rule than the exception, according to a battery of statistical tests to which I subjected copper’s price history.

Specifically, for each month since 1980 I measured the metal’s returns over both the recent past (over as short as the trailing couple of weeks) and the longer-term return (over as long as the trailing two years). I then searched for correlations between those returns and the S&P 500’s performance over numerous subsequent periods—from a few weeks to a few years. In no event were the correlations significant at the 95% confidence level that statisticians typically use to determine whether a pattern is genuine.

“ Those who believed copper was predicting a turning point in 2011 missed one of Wall Street’s most impressive bull markets. ”

To determine whether these results were being driven by more recent results, I then reran the rests focusing on the first half of my sample. In all cases I reached the same conclusions.

The bottom line? You can’t draw any inferences about the economy or the stock market from copper’s recent price surge. The economy and the stock market might be on the brink of the “Roaring ‘20s” scenario that some exuberant bulls are predicting, but they will need to look elsewhere than the price of copper to support their exuberance.

Mark Hulbert is a regular contributor to MarketWatch. His Hulbert Ratings tracks investment newsletters that pay a flat fee to be audited. He can be reached at mark@hulbertratings.com.