Home
Stocks
Deep Dive: Don’t be fooled by the ‘value’ tag on these tech stocks. Many can provide plenty of growth too
Prev Article Next Article
This post was originally published on this site

With another round of federal stimulus on the way and expectations for solid growth for the U.S. economy this year, value stocks have been rallying. Stocks with low valuations tend to do well during economic growth phases.

Mark DeCambre underlined the value rally by pointing out that the Dow Jones Industrial Average DJIA, +0.58% ended at a record high Dec. 10, while the Nasdaq Composite Index COMP, +2.52% was still in a correction.

But what about tech stocks? There’s plenty of value there too, as you can see in the screen below.

Economists polled by MarketWatch expect the U.S. economy to expand by 6% in 2021. Yes, that’s coming off a 3.5% contraction in 2020, according to the latest estimate from the Bureau of Economic Analysis. But the 2021 growth rate would be the fastest since 1984, according to World Bank data.

Read: Here’s what the 2016 value rally says about how far the current advance can go

There are several definitions of value stocks, but generally they are those that trade at lower valuations to earnings and typically grow their sales at a slower pace. That said, an individual value stock might also be considered a growth stock. This is illustrated by the Russell indexes.

For a large-cap technology value screen, we started with the information technology sector of the S&P 500 Index SPX, +1.04%. Here’s how this sector’s weighted aggregate forward price-to-earnings ratio has increased over the past five years: 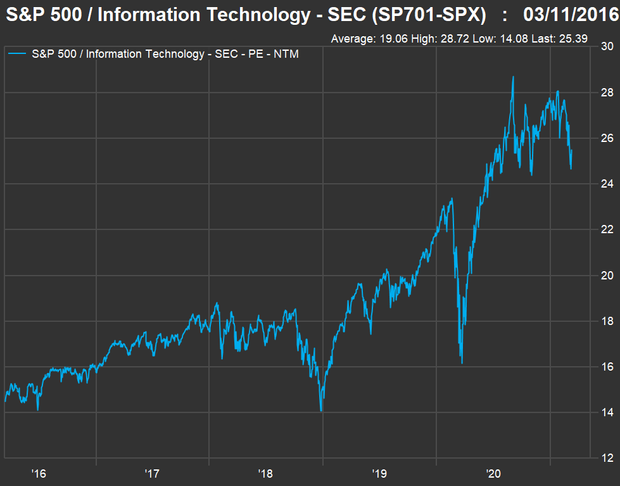 This doesn’t mean “expensive” tech stocks can’t be excellent investments. Salesforce.com CRM, +1.88% was trading at a forward P/E of 68.7 five years ago, and the stock has nearly tripled since then.

Getting back to the S&P 500 tech value screen, we then added tech-oriented stocks in the communications services sector, including videogame developers and Facebook Inc. FB, +3.39%, Alphabet Inc. GOOG, +2.91%, Netflix Inc. NFLX, +3.67% and Twitter Inc. TWTR, +5.60%. That brought the list up to 82 stocks. Two of the videogame developers made the cut, but among the four companies named above, only Facebook had a low enough P/E to pass the screen.

Scroll the table to see all the data, including sales growth estimates and dividend yields.

A note about the data: The operating margin and sales growth figures for 2020 are marked “estimated” because many companies have fiscal years that don’t match the calendar. So the figures are based on consensus estimates for calendar 2020 among analyst polled by FactSet. For Micron Technology Inc. MU, +4.57%, the 2020 sales growth figure is for the past four reported fiscal quarters through Dec. 3.

You might wonder about Facebook, which lives in both the value and growth worlds. Its forward P/E valuation of 23.2 is relatively low. But Facebook is very much a growth stock — sales increased 22% last year, and analysts expect even better revenue growth of 25% in 2021.

Facebook trades for seven times the consensus forward sales estimate, compared to a forward price-to-sales estimate of 5.9 for the entire S&P 500 tech sector. But that “high” price-to-sales ratio may not be so important because it is such a profitable company. Its 2020 operating margin of 50% is among the highest on the list.

Cody Willard called Facebook a bargain, not only because of its low P/E valuation but because of the long-term growth path for its Oculus virtual-reality hardware and software.

There are 16 companies on the list that are expected to produce double-digit increases in sales in 2021, including Skyworks Solutions Inc. SWKS, +3.63% and Qualcomm Inc. QCOM, +3.03%. Both are expected to grow their revenues by 21% this year.

Oracle Corp. ORCL, -6.53% is an “old tech” company that can be considered a value stock, as it trades for only 15.4 times the consensus earnings estimate for the next 12 months among analysts polled by FactSet. The company reported better-than-expected results for its fiscal third quarter after the close March 10 and increased its quarterly dividend by a third. Then on March 11, the stock fell as much as 9%. That “sell the good news” reaction may not be much of a surprise, as the stock had risen 48% over the previous year through March 10.

International Business Machines Corp. IBM, -0.57% is one of the cheapest stocks on the list, based on its forward P/E ratio of 11.5. The stock was up 2% from a year earlier through the close March 10. It has an attractive dividend yield of 5.10% that is supported by strong free cash flow.

Victoria Greene, a portfolio manager at G Squared Private Wealth in College Station, Texas, may have been a bit early when naming IBM as an excellent long-term play in June. But in a recent interview, she said she was still confident that there was a lot of upside for IBM “as a turnaround story and reinventing themselves,” in light of its July 2019 acquisition of Red Hat and the strength of its Watson artificial-intelligence software platform.

Leaving the list of 43 tech value stocks in the same order, here’s a summary of opinion among analysts polled by FactSet:

Scroll the table to the right to see the price targets.

The analysts see double-digit upside potential for 25 of the 43 stocks over the next 12 months, with Qualcomm in the lead. Among the analysts polled by FactSet, 70% rate Qualcomm a “buy” or the equivalent. And the consensus price target implies 34% upside for the stock.

The listed stock with the highest percentage of “buy” or equivalent ratings is Facebook, at 86%. The analysts expect the stock to rise 29% over the next year.

Don’t miss: 25 small-cap stocks that analysts expect to rise as much as 64% over the next year